Lincoln Land Community College is committed to assisting all members of our campus community in providing for their own safety and security. The annual security compliance document is available on the LLCC Police Department website at:

If you would like to receive a hard copy of the Annual Security Safety Report which contains this information, you can stop by the LLCC Police Department located in Sangamon Hall South, Springfield Campus, or you can request that a copy be mailed to you by calling 217-786-2278.

The website and report contain information regarding campus security and personal safety including topics such as: crime prevention, fire safety, campus police law enforcement authority, crime reporting policies, disciplinary procedures and other matters of importance related to security and safety on campus. They also contain information about crime statistics for the three previous calendar years concerning reported crimes that occurred on campus; in certain off-campus buildings or property owned or controlled by Lincoln Land Community College; and on public property within, or immediately adjacent to and accessible from the campus.

This information is required by law and is provided by the Lincoln Land Community College Police Department.

LLCC Human Resources is advertising for a general merchandise technician and a webstore technician. Full details on these and all other open positions can be viewed on the HR employment page.

Please join the Center for Academic Success in celebrating all of LLCC’s super tutors during National Tutor Appreciation Week, Oct. 3-7. Our academic success professionals and peer tutors are working hard to help students supercharge their learning. They break through procrastination. They lift students’ confidence with challenging course content. They power up students’ study skills. Check out the video footage we caught of some of these heroes in action.

We also want to celebrate the awesome staff and faculty tutors in the LLCC Math and Writing Centers, TRIO and Accessibility Services.

If you know someone who tutors at LLCC, please take some time this week to show your appreciation by dropping them a note, email or thank you card letting them know just how super you think they are and how much their work is appreciated.

According to the National Domestic Violence Hotline (NDVH), “Domestic violence (also referred to as intimate partner violence (IPV), dating abuse, or relationship abuse) is a pattern of behaviors used by one partner to maintain power and control over another partner in an intimate relationship.” NDVH also states that one in three women in the U.S. will experience rape, physical violence and/or stalking by an intimate partner. Women ages 18-24 generally experience the highest rates of domestic violence.

The National Coalition Against Domestic Violence (NCADV) reports that one in four men have experienced some form of physical violence by an intimate partner; one in seven have been severely abused. The American Psychological Association observes that there is severe underreporting from male victims because of the stigma associated with males being victims.

Remember, rights and resources for survivors of domestic violence are available on our website.

Questions concerning Domestic Violence Awareness Month may be directed to Nikki Baker, compliance and prevention coordinator at nikki.baker@llcc.edu or 217-786-3426.

The next Superfans matchup is Wednesday, Oct. 5, at 4 p.m. featuring women’s soccer taking on Kaskaskia. Athletics will have Logger gear to choose from while supplies last. Be sure to come out with your friends, family and colleagues to help cheer the Loggers to victory! As always, admission to LLCC athletic events for LLCC students, staff and faculty is free.

Want to get a head start on your holiday shopping? Amazon’s Prime Early Access Sale is Oct. 11-12 and will give Prime shoppers “early access” to its Black Friday and Cyber Monday deals.

If you plan to shop Amazon at any time, please support LLCC students and programs by shopping AmazonSmile and designating the LLCC Foundation as the charity of choice by visiting https://smile.amazon.com/ch/37-1360597.

See which faculty and staff have birthdays in October. 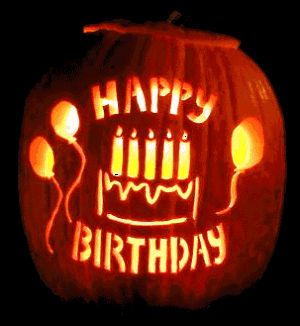 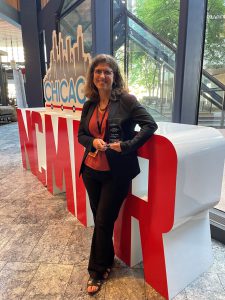 Kyla Kruse, director of communications, was named the 2022 Communicator of the Year for District 3 of the National Council for Marketing and Public Relations (NCMPR). She received the award at the District 3 NCMPR Conference in Chicago on Sept. 29 in recognition of her “outstanding achievement in community college marketing and public relations.” NCMPR District 3 covers Illinois, Indiana, Michigan, Ohio, Wisconsin and the Canadian province of Ontario. Congratulations!

As a reminder, the fourth quarter module of the cybersecurity awareness training program with Infosec IQ runs through today, Sept. 30. It entails a series of three short training courses followed by an assessment for each. The courses focus on ransomware, physical security and data privacy. The purpose of this training is to raise awareness of the threats in our environment and to avoid costly data breaches.

All employees are required to complete this training by Sept. 30. Failing to comply may result in loss of LLCC network access privileges and disciplinary action per board policy “8.6 – Employee Discipline.”

Employees will be sent an email notifying them of enrollment in the course. The provided link will take the learner directly to their dashboard to complete the module.

The enrollment email will be coming from Infosec IQ Notifications <notifications@securityiq-notifications.com> with the subject “Start your security awareness training” Here is an example of what the email will look like: 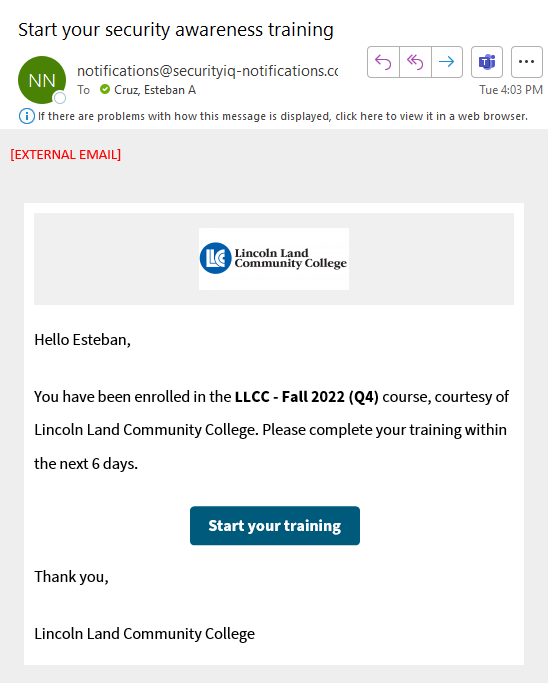 To register, please refer to the information emailed Sept 21.

There will also be an Employee Health & Wellness Fair on Oct. 4. All employees are encouraged to come by anytime between 8 a.m. and noon. Attendance will enter you into a drawing for great prizes including gift cards and a Fitbit SmartWatch!