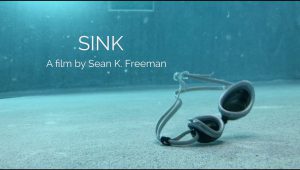 LLCC Alumni Services invites all faculty, staff and students to attend an original film screening today at 6 p.m. in Menard 2209. A question and answer period will follow the screening.

LLCC alum Sean Freeman (’14) is a filmmaker based in central Illinois. He graduated from SIU-Carbondale in 2016. Sean has been a part of several film productions serving in various positions. His first feature film, “SINK,” is currently in the final stages of post-production, and he will begin shooting his newest short film, “TAKE CARE,” which he is writing, directing and acting in, at the end of April 2018.

“SINK” is a very personal project to him. It was loosely based on an experience that he had his sophomore year of college, and it was not until his senior year when he decided to pen a screenplay about it. Through about a year of pre-production and financing, he and his team of collaborators were able to shoot the film in 15 days over the summer of 2017. Though shooting the film was incredibly taxing and a huge learning experience for everyone involved, he could not be more proud of the film they all created.

“SINK” addresses conflicts many college students go through on a daily basis such as depression, grief, loss and the feeling of being a burden to others. With this film he wanted to address those feelings head on with honesty and authenticity, leaving the audience with a sense of hope.