The LLCC Board of Trustees will meet Wednesday, June 24 at 5:15 p.m. in the R.H. Stephens Room, Menard Hall. Find the agenda HERE.

Scott Stallman was named to the new position of associate vice president of LLCC outreach. Stallman will oversee operations at LLCC education centers in Jacksonville, Beardstown, Taylorville, Litchfield and Hillsboro as well as district-wide high school partnerships and dual credit/dual enrollment agreements. Stallman has served as executive director of LLCC-Taylorville, Litchfield and Hillsboro since 2010. He will graduate in August with a doctoral degree in higher education administration from Illinois State University, and holds a master of education from the University of Missouri-St. Louis and a bachelor’s of science from the University of Missouri-Columbia. Prior to his work at LLCC, he was assistant dean of career programs at Moraine Valley Community College, assistant director of new student programs at Columbia College Chicago, and department chair, instructor and director of the career center at Stevens Institute of Business Arts.

Keri Mason will be the new director of LLCC-Jacksonville, where she has served as assistant director since 2008. She will also oversee operations at LLCC’s Beardstown location. She recently earned her master of arts degree from the University of Illinois-Springfield (UIS), where she was named outstanding graduate in communication. She holds a bachelor of arts degree from Truman State University. Prior to LLCC, she served as director of annual giving at Illinois College.

Debra “Dee” Krueger was appointed director of LLCC-Taylorville, where she has served as assistant director since 2009. She joined LLCC in 1992 as an an administrative assistant at the Taylorville Correctional Center, became an adjunct faculty member in 1994 and served as an administrative assistant for regional services from 1996-2009. She holds a master online teacher certificate from the University of Illinois and Illinois Online Network, a bachelor of arts from UIS and associate in general education from LLCC.

In other action, trustees approved a policy change that would bring the college into compliance with the new Illinois Smoke-Free Campus Act that takes effect July 1. Smoking and use of tobacco products will be prohibited on any college-owned or operated property, except when an individual is traveling through or parked on campus in a personal vehicle. All students, employees and visitors to any LLCC location will be required to comply with this policy. 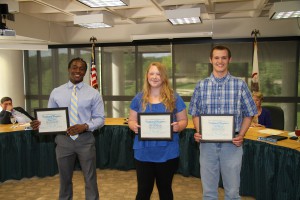 GED grads Grayson Davis, Page McAlexander and Isaac Schmidt were recognized at the board meeting for their academic accomplishments.

And, the board recognized three graduates of LLCC’s Adult Education high school equivalency (GED) program. Page McAlexander of Springfield completed the requirements for her GED early last fall, and has since completed two semesters of courses at LLCC as an honors student and student worker. Isaac Schmidt of Litchfield earned his GED in December, and just finished his first semester at LLCC with a 4.0 grade point average. Grayson Davis of Springfield recently completed all the requirements for his GED, and plans to enroll in LLCC this fall.

The LLCC Board of Trustees will meet Wednesday, May 27, at 5:15 p.m. in the R.H. Stephens Room of Menard Hall.

The Lincoln Land Community College Board of Trustees elected

Craig Findley of Jacksonville as its new chair, Jerry Wesley of Witt as vice chair and Dennis Shackelford of Rochester as board secretary, all for two year terms, at last night’s April meeting of the board. 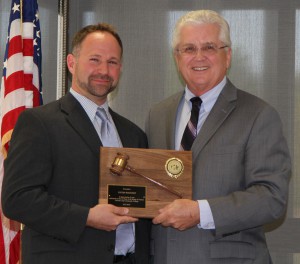 Findley, who also served as chair in 1997-1998 and 2003-2005, replaces retiring chair Justin Reichert of Springfield, who remains on the board as trustee. Findley thanked Reichert for his “exceptional leadership.”

The board also seated a new student trustee. Madison Baker of Hillsboro was elected by LLCC students to represent them on the board. She will serve a one-year term and replaces retiring student trustee Jefferson Gentry of Springfield, who was honored for his year of service and student leadership.

The board also heard first reading of a policy change that would bring the college into compliance with the new Illinois Smoke Free Campus Act that takes effect July 1 of this year. Smoking and use of tobacco products will be prohibited on any college-owned or operated property, except when an individual is traveling through or parked on campus in a personal vehicle.

The LLCC Board of Trustees will meet Wednesday, April 22 at 5:15 p.m. in the R.H. Stephens Room, Menard Hall. The agenda can be found HERE.

The LLCC Board of Trustees is meeting Wednesday, March 25 at 5:15 p.m. in the R.H. Stephens Room. View the agenda HERE.

The LLCC Board of Trustees will meet Wednesday, Feb. 25 at 5:15 p.m. in the R.H. Stephens Room, Menard Hall. Click HERE for the agenda.

The LLCC Board of Trustees will meet Wednesday, Jan. 28 at 5:15 p.m. in the Robert H. Stephens Room, Menard Hall. The agenda can be found HERE.

The LLCC Board of Trustees honored the college’s national championship livestock judging team at the December board meeting Wednesday evening.

Coach Craig Beckmier, professor of agriculture, told trustees, “We are proud to bring you this national championship trophy, earned by some of the finest young people in the U.S. who represented your college very well.” He said the team placed in the top five in several competitions prior to earning first place at the recent North American International Livestock Exposition in Louisville, Ky. Professor Beckmier, who was honored at the competition as Fred Francis Coach of the High Team, introduced team members Rob Johnson of Niantic; Dalton Heavner of Pittsfield; Damon Stayton of Carlinville; Amy Loschen of Kempton; Adam Heffelfinger of Ashland, Ohio; Jackson Johnson of Poneto, Ind.; and Will Harsh of Radnor, Ohio.

LLCC Board Chair Justin Reichert said the board was very proud of the team and pleased to honor them, noting that all planned to continue their educations at four-year college or university agriculture-related programs.

Trustees also acknowledged, with thanks, recent major gifts to the LLCC Foundation to support student scholarships, including $1.5 million from the estate of Howard Million, $420,687 from the Russell L. and Thelma L. Kirchner Trust and $40,000 from Virginia Gies.

In routine December action, the Board approved the 2014 tax levy that is expected to result in an LLCC district tax rate at or near the current rate of approximately 46 cents per $100 of equalized assessed property value.

And, Bill Harmon, professor of agronomy and 2014 Pearson Master Teacher at the college, spoke to trustees on his teaching philosophy “Who Cares?” and how he uses it to increase student engagement and learning. His essay on the subject can be read HERE.

The LLCC Board of Trustees is meeting tonight at 5:15 p.m. in the R.H. Stephens Room, Menard Hall. Read the agenda HERE.