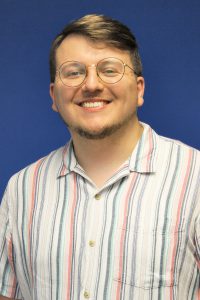 Alex Dean began work on Aug. 1 as an enrollment services representative at LLCC. He was previously a student worker for the college, working at a COVID testing site. Alex is working on an associate degree at LLCC, majoring in communication and minoring in psychology. He can be reached by phone at 217-786-2369 or by email.

Admissions, Records and Registration offices are cleaning out in anticipation of an upcoming renovation.  They have various office supplies that are up for grabs.  If anyone would like to stop by and take a look, they would love them to go to a good use.

LLCC recently divided the role of director of admission, records and registration into two positions: registrar and director, admission and registration. The college is currently advertising for the latter position.

Robin Ackman accepted the newly created position of registrar and began work May 1 in this role, heading up the LLCC Records office. She has been with the college since 1996, and previously served as director of admission, records and registration.

Shawn Allen has been promoted to records coordinator. She has been with LLCC for 16.5 years, most recently serving as student records evaluator.

Nina Koch has joined the records team as records specialist. She was previously a registration specialist and has been at LLCC since 1992.

As a reminder, fall grades — including M2 and S1 — are due by Monday, Dec. 21 at noon. If you experience any problems or have questions, contact Shanda Byer at shanda.byer@llcc.edu. Please do your part to make the end-of-term processing smooth for staff and students.

As a reminder, fall grades — including M2 and S1 — are due by Monday, Dec. 21 at noon. If you experience any problems or have questions, contact Shanda Byer at shanda.byer@llcc.edu. Please do your part to make the end-of-term processing smooth for staff and students.

Please remind students that if they have not already done so, now is the time to turn in their graduation application for summer 2020. The deadline to apply for summer 2020 is July 15. Graduation is not automatic.

They can apply for graduation through Logger Central or download the Graduation Application and email it  to records@llcc.edu.

Contact LLCC Student Records at 217-786-4956 or records@llcc.edu if you have any questions. Thank you!

LLCC Admission and Registration staff share the many ways they are here to help current and future students with all their admission and registration needs!

When handling student information at home, please be mindful of disposing of student information. Even scratch paper where you have written a student ID number should be discarded properly. Do not throw away paper containing student information and do not attempt to shred it at home unless you have a cross-shredder which cuts into little pieces instead of strips. Normal strip shredding is not sufficient. Instead, establish a receptacle as a shred bin. When you return to work, bring the papers in and place them in a college shred bin. If your department does not have a shred bin, you can access bins in the VP office area, Student Success or Financial Aid.

Midterm verifications are due today, March 18, by noon. Please contact Robin Ackman (robin.ackman@llcc.edu) or Susan Mendenhall (susan.mendenhall@llcc.edu) with any questions.