On Sept. 4, 7-8:30 p.m. Tony Rothering, professor of biology, will be providing a presentation on Adventures in Bird Banding as part of the Paul Mickey Learning Series hosted by the Illinois State Museum. He will discuss the purpose and methodology of capturing and banding birds, including current banding projects in central Illinois. The event takes place in the Thorne Duel Auditorium at the Illinois State Museum, 502 S. Spring St.

Patrick Moore, director, concurrent enrollment and Kyla Kruse, assistant director, public relations, will be participating in Leadership Springfield, sponsored by the Greater Springfield Chamber of Commerce. Leadership Springfield is a 14-week series of half-day programs, beginning Sept. 5, during which participants gain leadership skills and in-depth exposure to critical issues affecting the Springfield area. Outside of the regular program sessions, participants will also be challenged to exercise creativity and problem-solving skills by working as teams on projects for the benefit of area not-for-profit organizations.

Dave Pietrzak, program director, aviation, served as one of the four evaluators of the simulated aircraft disaster drill Aug. 26 at Abraham Lincoln Capital Airport, involving more than 30 local, state, federal and private agencies. Dave was asked to lend his expertise to critique the exercise and participated in a post-drill debriefing as well. LLCC aviation students assisted behind the scenes. Dave took these photos. 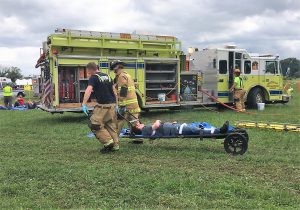 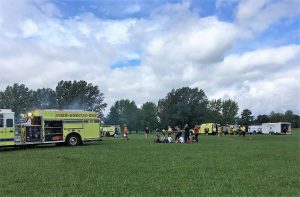 Colin Suchland, Ph.D., professor of sociology, LLCC; Timothy McKenzie, professor of journalism and philosophy, LLCC; and Adriana M. Crocker, LLB, Ph.D., professor of political science, UIS, will serve as panelists at “Ethics, Morality and Contemporary Values” on Sept. 18, 6 p.m. in the Thorne Deuel Auditorium at the Illinois State Museum, 502 S. Spring St. This panel presentation will explore the use of truth and facts in contemporary life. The presentation is a first in the series “Finding Truth in the Age of Alternative Facts” hosted by LLCC’s Academy of Lifelong Learning and the Illinois State Museum.

The moderator for all three programs will be Jim Leach, news director of News/Talk 94.7 and 970 WMAY. Registration is requested by calling 786-2432.

Other presentations in the series are: 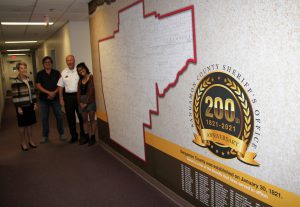 Dr. Charlotte Warren, president, was invited yesterday by Sangamon County Sheriff Jack Campbell to view the large wall mural recently installed in the Sheriff’s office suite. It depicts an 1800s-era map of Sangamon County. A smaller version, with hand drawings of several historic sites in Sangamon County and a list of all past sheriffs, is mounted in his office. The project was designed and produced by Thom Whalen, professor of art, and his student, Jessica Le. Sheriff Campbell, who is an LLCC alum, had the idea for the wall map, and expressed his thanks to Dr. Warren for letting him work with LLCC to make it a reality. 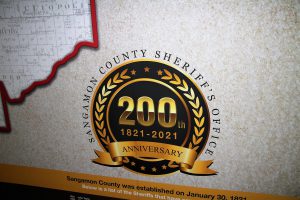 Professor Whalen, who also created the logo for the upcoming 200th anniversary of the Sheriff’s Office, commented, “Jessica is a first-generation college student who came to us with so much talent. She had this great experience at LLCC and is now going into interior design and art history at ISU. It was a perfect opportunity for her.” He noted that Ryan Roberts, interim dean of English and humanities, assisted by locating the map.

Jessica, who drew the historic sites for the smaller wall print and assisted with the entire project, signed her name to it at the Sheriff’s request and said, “Thank you for giving me this opportunity to get hands on experience in a real-world project.”

Dr. Warren was interviewed by the State Journal-Register for this story about the project. WICS also covered the story.