Ahoy! LLCC Theatre will hold auditions the evenings of Monday, Aug. 31 and Tuesday, Sept. 1 for its fall production of “Your Swash Is Unbuckled,” directed by Mark Hardiman, professor of theatre. Auditions will take place from 7-9 p.m. in Sangamon Hall South, lower level. Persons unable to audition those evenings should email mark.hardiman@llcc.edu.

“Your Swash is Unbuckled” is a collection of short stage combat plays by Jeff Goode. Each play is approximately 10 minutes long and features swashbuckling, sword-swinging action.

All roles are open in this production. Auditions will include reading from the script and movement exercises. The cast is comprised of adults and young adults able to play 19 years and older. College students and community members are encouraged to audition. Those interested in backstage duties, stage management or serving as assistant to the director should drop by auditions for a brief conference with the director.

LLCC Theatre is committed to education in theatre, emphasizing not only performance but also growth in those involved in the production. Those participating will register for college credit or participate through LLCC’s Community Education program.

The James S. Murray Gallery on the second floor of Menard Hall opened its fall season Monday with the photographs of Carrie Beard. The exhibit, called “Paradigm,” is open weekdays, 8 a.m.-4 p.m., through Sept. 17.

Ms. Beard, a photographer based in Springfield, has assembled a collection of her work that she calls “a labor of love and expression 25 years in the making.”

Ms. Beard holds a degree in photojournalism and publication design from Indiana University at Bloomington. Her photojournalism training is evident, as her photos document clips of everyday life. Although the images were captured in a range of countries, as well as spanning years, each frame illuminates common human expression, elevating it to a position of art and timelessness.

After experiencing the world, Ms. Beard returned to Springfield to raise a family, and for the past several years has been taking classes at LLCC toward her professional interests. It’s there that she developed the spark to complete a series of work that began with photographs taken almost 25 years ago. Although she enjoys the physicality of working with film and the value of light in the black and white image, she is comfortable working with both analog film and digital 35 millimeter cameras. The photographs in the exhibit show the range of her experience.

More of Ms. Beard’s work can be viewed at www.carriebeard.net.

Her photos will also be featured at a reception at the college’s Trutter Museum Sept. 25 from 5-7 p.m., marking the opening of a new exhibit there.

Have a food or cooking question? Email epicuriosity101@llcc.edu

The authors of Epicuriosity 101 – Nancy Sweet, Marnie Record and Jay Kitterman – are ready to answer any questions you have about food (including organic and local food), cooking, baking or eating. Your question and their answer may appear in a future Epicuriosity 101 column in the State Journal-Register. Take advantage of the knowledge of these experts. Send your question to epicuriosity101@llcc.edu.

There are many activities lined up for Welcome Week! Check out the upcoming events listed in the calendar in the far right column of LincIn.

The Instructional Technology and Distance Education department is excited to offer a full range of workshops covering a variety of topics this semester. Find the fall 2015 schedule of ITDE workshops online at: http://www.llcc.edu/itde/workshop-schedule/

On behalf of the Student Life Office,  thanks to everyone who participated and assisted in our New Student Welcome Lunch last Wednesday! Faculty, staff and student staff helped us to make this event possible. We had more than 130 students who had a great time connecting with faculty, Lincoln Land staff and some of our current students! We also want to extend a big thank-you to the individuals who provided us with the wonderful prizes for our winning students–Nancy Sweet, Ron Riggle and Trudy Stutzman. We look forward to building our number of students and working with you all next year! 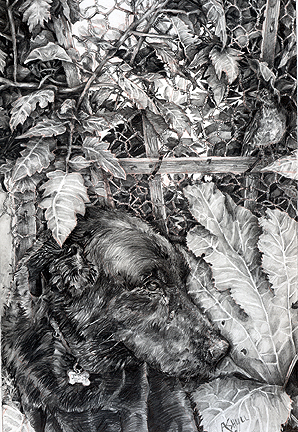 Professional Art Exhibit under the drawing category with his graphite drawing, “Izzy among the Garden.”

Dave Pietrzak, program director, Aviation, was interviewed by the State Journal-Register for this Aug. 23 story on opportunities for LLCC aviation students at Standard Aero, which is under new ownership.