The LLCC Recital Series continues Sunday, Dec. 7 with Flute Chamber Music featuring Dr. Abigail Walsh. The performance begins at 4 p.m. in the Trutter Center and is free and open to the public.

Illinois-based flutist Dr. Abigail Walsh has performed as a solo, orchestral and chamber musician throughout the U.S. Dr. Walsh is on the faculty at the University of Illinois-Springfield where she coaches chamber groups and music ensembles, teaches music courses and performs in solo and chamber recitals.

Children of all ages were delighted by the Christmas display that filled the auditorium at LLCC-Litchfield Nov. 21-23, for the 12th annual City of Litchfield Festival of Trees. Approximately 1,000 guests visited this year’s activities, which brought in $3,500 for local charities. 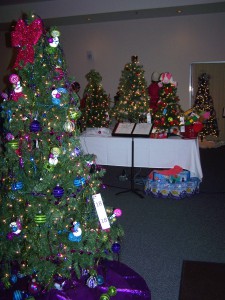 centerpieces and a new category this year, gingerbread houses. The event also included live entertainment by a barbershop quartet, Jim Lutz, Lynne and Thomas Taylor, Mark York, the Rafferty family, the Zion Lutheran Church hand bell choir and the Lincolnwood High School choir. Volunteers from the Elizabeth Ann Seton program and the Litchfield High School FCCLA chapter manned the Little Elves workshop, where children  decorated gingerbread cookies and visited with Santa Claus. There was also a display of Christmas trees in the hallway with handmade ornaments by Litchfield students in grades pre-K through three. Visitors had the chance to vote for their favorite tree, with the winning class given a prize. 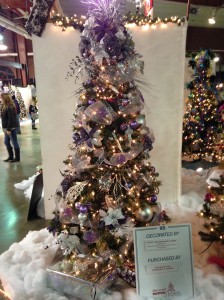 Brenda McGuire is the new site coordinator at LLCC-Beardstown. She 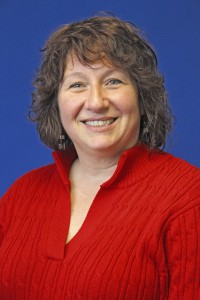 The Higher Learning Commission (HLC) is seeking feedback on your experiences and perception of Strategy Forum. To gather that information, a survey link is provided below for anyone who participated in the all-campus activities on Nov. 4 in Cass Gymnasium. If you would like to provide feedback, please respond by Friday, Dec. 12. The survey results will only be accessible by staff associated with the HLC – this is not an LLCC survey.

The HLC appreciates everyone’s feedback and their candor. The on-campus Strategy Forum was a pilot, and the HLC’s goal is to improve the product provided to its AQIP institutions.

Student Services and Public Relations and Marketing have teamed up to encourage current students to register for spring classes with the Register and Relax campaign. The campaign includes a sign at the entrance to 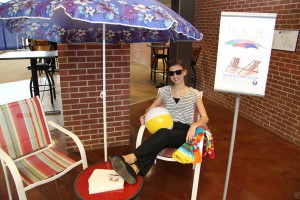 Soon, you will see “Register and Relax” written on classroom blackboards and whiteboards, along with mirrors in bathrooms (all with Facilities Services approval of course!)

We ask that you encourage students to register now for spring classes so they can relax on their holiday break, knowing their spring schedule is in place. Advantages to registering now are a greater selection of classes and a more flexible payment plan.

If students have questions, please refer them to the Enrollment Services hallway in Menard or to ESA staff members, who are eager to help them Register and Relax!

For the second day in a row, the LLCC Foundation has announced a major gift to fund student scholarships. The gift of $1.5 million from the estate of Howard P. Million will be used to establish the Howard and Vera Million Endowed Scholarship Fund.

Mr. Million, formerly of Roodhouse, farmed his entire life in the Greene, Scott and Morgan County areas. He also was the founder and president of the former Roodhouse Savings & Loan Association. Mr. Million died in October at the age of 102.

LLCC President Charlotte Warren, Ph.D., stated, “Mr. Million’s legacy of giving and generosity, along with his belief in the value of education will benefit Lincoln Land Community College students for years to come. This gift creates opportunities for LLCC students to further their education, pursue their dreams and enhance their lives.”

According to Karen Sanders, LLCC Foundation executive director, “Mr. Million always wanted to attend college, but did not have the opportunity.”

Only the annual interest earned will be used to fund scholarships. It is anticipated that scholarships will be awarded beginning in the 2015-2016 academic year. First-time LLCC students who are residents of Morgan, Scott or Greene County and demonstrate financial need are eligible. Students also must be enrolled full time in a transfer program.

“We find it especially fitting that the Foundation received this gift during this special season of giving,” stated Ms. Sanders. “We are honored to be a recipient of the Million’s generosity, and our students today, and in the future, will be the true beneficiaries.”

The college has begun the process of accepting nominations of faculty members for the National Institute for Staff and Organizational Development (NISOD) Excellence Award. This award recognizes faculty members who demonstrate excellence in teaching and leadership at LLCC.

Students, staff, and faculty may submit nominations, so please consider nominating a faculty member whom you feel exhibits excellence in teaching and leadership and any other qualities that set him or her apart. The nomination does not have to be lengthy; however, it should contain an explanation of why you are nominating the faculty member, including examples of excellence in teaching and leadership. Nominations (form below) should be sent to Leslie Rios, chair of the Faculty Development and Recognition Committee of the Faculty Senate either via email (Leslie.Rios@llcc.edu) or paper. The deadline for submitting nominations is Monday, Dec. 15.

LLCC kicked off an initiative yesterday to encourage all students to complete their degrees and certificates. Sponsored by the LLCC chapter of Phi Theta Kappa (PTK) international honor society, the Community College Completion Corps (C4) encourages students to sign a pledge card which signifies their commitment to complete their degree or certificate. Students can also sign a banner, which will be prominently displayed.

Claire Gordon, Ph.D., professor of speech and advisor to LLCC’s PTK chapter, introduced LLCC President Charlotte Warren at the ceremony, who spoke on the importance of completion. “LLCC students who complete their degree can expect to earn $843,000 more in their lifetime. Unemployment for community college graduates is 30 percent lower than for high school grads. Make a commitment to complete your degree. We are beside you all the way!”

Representatives of PTK will also be in A. Lincoln Commons Dec. 3-5 from 11 a.m.-1 p.m. to allow students, faculty and staff to sign pledge cards and banners. More information is available at www.cccompletioncorps.org

Over the last few years the number of students with Asperger’s attending college has grown significantly. This session will increase participants’ basic knowledge of this autism spectrum disorder, and increase their skills and comfort level in working with students who are diagnosed with Asperger’s. To register, click HERE.

Have you ever had questions about how to accomplish something in Blackboard but couldn’t attend a previously scheduled Blackboard workshop to ask? This monthly, drop-in open house session gives you the opportunity to get individual help with your questions. No registration is required.

You are invited to hear talented LLCC music students in recitals today and this evening. The Informal Recital is at 4 p.m. and the Honors Recital is at 7 p.m., both in Menard Hall 2250.