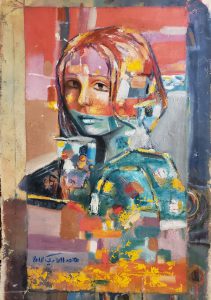 The public is invited to attend a gallery talk and reception tomorrow, Oct. 24, beginning at 5:30 p.m. in the Trutter Center for the art exhibit “Stamps of Hope.” The talk will be followed by a gallery tour and reception featuring Middle Eastern cuisine.

“Stamps of Hope,” is a traveling art exhibit that showcases Syrian refugee artwork from the Zaa’tari Refugee Camp in Jordan. It is on display in the James S. Murray Gallery through Nov. 14 and can be viewed on weekdays from 8 a.m. to 4 p.m.

Rihab Sawah, LLCC assistant professor of physics and organizer of the “Stamps of Hope” exhibit, will present the gallery talk. “The art celebrates the hope of a war-torn people who have left their home to try to create a better life for themselves and their families. This community of artists is struggling to make a living in a country where they have no security or citizenship,” she explains. 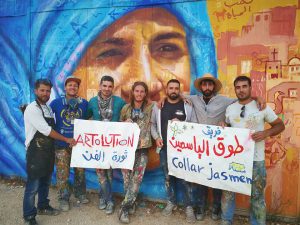 Some refugees had brought a few art supplies with them from Syria. They painted on available material such as newspapers and cardboard boxes that were used for transporting food and tent fabric from the camp. Eventually, they held an art exhibit within the refugee camp. The UN Commission and International Relief and Development Organization became interested in the art projects and supported the refugees by bringing in art supplies and arranging for participation in art exhibits outside the refugee camp.

The artists regularly organize art workshops for children in the refugee camps. Such workshops offer the children a platform to express their ideas and sentiments, as well as give them hope for a brighter future, which they paint with their own hands and hearts. These artists have created a place for children to share their emotions and to come together as a community and learn they are not alone. The children’s workshops are a place for encouraging creativity and healing war wounds, and are funded by the artists themselves from the sale of their artwork.

The current “Stamps of Hope” exhibit is opening at LLCC and will travel around the country for five years. New paintings and new contributing artists join the exhibit annually. The exhibit is sponsored by the Midwest Institute for International and Intercultural Education (MIIIE) based at Kalamazoo Valley Community College in Michigan.