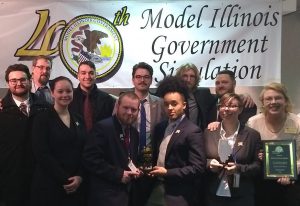 “Model Illinois Government was created 40 years ago by LLCC political science professor George Perry, and to win the award on this anniversary was a great honor for the team,” said Dr. John Vinzant, LLCC professor of political science and team advisor. “This is the fifth time we have won the award in the last decade.”