Tony Rothering, professor of biology, reports that a student (Maureen Hurd) from UIUC is conducting her graduate research 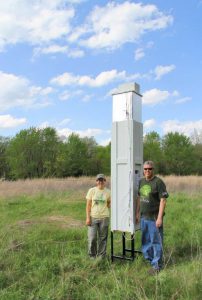 project on chimney swifts. This bird species historically used hollow trees for nesting, constructing a rather haphazard nest out of sticks and saliva. They adapted readily to using the human-made equivalent of a hollow tree … chimneys. As we have progressed to high efficiency furnaces, etc., the construction of traditional brick chimneys (that are not capped) has declined. This in turn has caused a decline in chimney swift populations. One aspect of Maureen’s project is to look at the effectiveness of artificial “chimneys” or towers as an alternate nesting site for this species. Maureen was looking for locations around central Illinois to place her towers where they could, hopefully, be monitored on a regular basis. Upon hearing about the bird monitoring/banding activities here at LLCC, she elected to erect a tower in the prairie between the lake and the softball field. If the nesting tower is used by chimney swifts, Maureen will monitor the nesting activities with an internal camera and possibly attach GPS locators to a bird to monitor the short-term movements of that individual bird.