TAYLORVILLE – A $1.9 million renovation at Lincoln Land Community College-Taylorville that will enhance services to students beginning this fall was on display last night for LLCC trustees and community leaders, prior to the July LLCC Board of Trustees meeting. 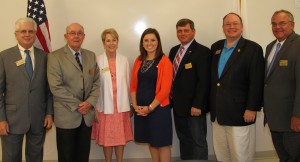 provide a welcoming new student services area and gathering space; computer labs for testing and general use; a state-of-the-art Mac lab for new digital media classes; staff offices and energy efficient improvements. Welding and construction areas of the building were upgraded with a new classroom. The building’s metal exterior was enhanced with design elements to complement the south classroom building, constructed in 2011.

“The newly renovated building looks amazing and will serve our Taylorville area students extremely well,” commented Craig Findley, LLCC board chair. “We, as a board, are pleased that all of our outreach centers now reflect the high quality of the education offered at LLCC.”

The 40-year-old building originally housed a factory which produced grain bins. It was reconfigured for use as LLCC’s Eastern Region Education Center in 1994. As enrollment increased in subsequent years, temporary, mobile structures were added to the site to accommodate classrooms. Those structures were eliminated when the new classroom building opened four years ago. 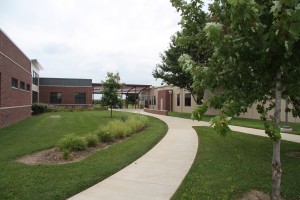 The newly renovated north building at LLCC-Taylorville features design elements that complement the south building, constructed in 2011, to add to the “campus” feel.

the board’s commitment to providing quality facilities throughout the district, and said a community open house with tours of the new spaces is planned for Monday, August 10 from 10 a.m. to 2 p.m.

“We invite future and current students, families and members of the public to see our newly renovated building as well as the four-year-old classroom building next door. Both are attractive, highly functional facilities that add a layer of excitement to the already excellent teaching and learning that happens here at LLCC-Taylorville.”

Among the guests at the preview reception was 95th District State Representative Avery Bourne.

Following the reception, trustees voted to put the college’s tentative, fiscal year 2016 operating budget on file for public review for 30 days, as required by law. Final approval of the $43-million balanced budget is anticipated at the September board meeting.

The board also honored four retired LLCC faculty with the title of “Emeritus,” which recognizes outstanding contributions in teaching and service to the college by full-time faculty who have served a minimum of 20 years. Those so honored were retired automotive technology professors James Addington of Chatham, who taught full-time from 1981-2006; Tom Donaldson of Plainview, 1973-1995; and Joel Tjelmeland (deceased) of Rochester, 1971-1998; along with retired professor of math and physics Tom Snyder of Springfield,1987-2012.