An open forum will be held today, 2-2:45 p.m. in Menard Hall, Room 2207, with the second of three candidates for the dean of English and humanities position. Please attend if possible.

An open forum will be held today, 2-2:45 p.m. in Menard Hall, Room 2207, with the first of three candidates for the dean of English and humanities position. Please attend if possible.

Below are the dates, locations and times for the remaining forums.

Three candidates will be coming to campus for interviews for the dean, English and humanities position. Below are the dates, locations and times for these forums. Please attend if possible.

This summer I was given the opportunity to attend the National Association for the Education of Young Children’s (NAEYC) Professional Learning Institute in Austin, Texas. The institute this year was focused on advancing the profession. NAEYC has been focused on Power to the Profession for the last two years, hoping to move the field of early childhood forward into a well-unified profession with everyone being on the same page.

I was lucky to be able to attend seven sessions while I was at the conference. All the sessions were ones that I had chosen to go along with my teaching duties here at LLCC. One that I found interesting was on building our students’ professional identity. Students need to feel empowered and understood, allowing them to be the leader of their own educational experiences. They have knowledge that they bring to my classroom and allowing them to build on that knowledge is only going to help them become better teachers. The presenter talked about the four stages of competence: unconscious incompetence, conscious incompetence, conscious competence, and unconscious competence. I am including a link to a website on this idea: https://trainingindustry.com/wiki/strategy-alignment-and-planning/the-four-stages-of-competence. I found this to be helpful in my work with students.

Another session I attended was the National ACCESS day. ACCESS is a professional group for associate degree early childhood teacher educators. It is always nice to go to this session because we are all working at the associate degree level, and this is an opportunity for us to network and learn from each other. This year there were several ideas shared, one of my favorites was “The Scrapbook Page Project.” This is a project being used by several instructors in different states. The idea is to get students thinking about their unique backgrounds and what they bring to the table. Students created a scrapbook page that shared images that reflected what inspires them as teachers and then were asked to share in class regarding their creation; students were able to share a little about themselves and start to see themselves as professionals. 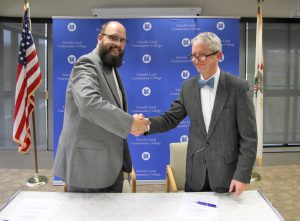 Officials of LLCC and Western Illinois University signed a new academic transfer partnership, or articulation agreement, yesterday. The agreement is designed to facilitate the ease of transfer of LLCC students wishing to achieve a bachelor of arts in general studies at WIU.

Ryan’s online lesson entitled, “Art Movements: An Overview” from his Humanities 101 course was chosen by the SoftChalk (http://softchalk.com) company as their Lesson of the Week. Ryan’s lesson can be viewed through the link below.

SoftChalk Lesson of the Week – Art Movements: An Overview
(This lesson discussed the value of art, different artistic styles and goes through the different art movements throughout history.) https://www.softchalkcloud.com/le…/serve/49pbYvB3D6kqO2/html

If you would like to learn how to create your own lesson using the SoftChalk software, please contact Barry Lamb, director of instructional technology services in the Academic Innovations and eLearning department.

The National Science Foundation has awarded an Advanced Technical Education grant of $199,999 to LLCC. The three-year grant begins in June and will support the development of a competency-based certificate program in cybersecurity.

The project is under the direction of Dr. Wendy Howerter, associate vice president of academic innovation and effectiveness, and professors of computer networking Frank Marsaglia and Jeff Mehan.

LLCC is developing the competency-based certificate program in cybersecurity with implementation planned for fall 2018. The new competency-based certificate will provide academic credit based on students’ knowledge and mastery of skills, rather than time spent in the classroom and credit hours earned. In addition, LLCC currently offers instruction in cybersecurity as one of seven tracks leading to an associate of applied science degree in computer information systems.

“As individuals continue to do more and more online and we give up privacy for convenience, we are at greater risk of identity theft and cyberattacks,” said Professor Marsaglia. “The demand for employees trained in cybersecurity is growing quickly. This competency-based program will allow students to potentially earn a certificate and find employment in less time, based on their prior knowledge and abilities.”

“The competency-based program is also an opportunity for those individuals already employed in the field,” said Dr. Howerter. “I believe the flexible format will appeal to working students since the mastery of competencies will be learned and demonstrated in an online and virtual environment. This program will bring the security skills of employees to a level needed to support systems in today’s digital world.”

In 2015, LLCC was one of six colleges and universities nationwide chosen to participate in a competency-based training program called “Jumpstart,” funded by the Lumina Foundation. The college began work on developing a competency-based program in cybersecurity, and the new NSF grant will continue that effort.

Bistro Verde, LLCC’s student-run café, will be open spring semester for lunch on Tuesdays and Thursdays from 11 a.m.–1 p.m. and dinner Mondays and Wednesdays from 5-7 p.m. Reservations are strongly encouraged, and can be made by emailing bistroverde@llcc.edu, calling 786-2821 or stopping at the café during hours of business.

The LLCC Bird Banding Station announces its final report for the fall 2016 banding season (our 9th banding season) Final Report — LLCC BBS (Fall 2016). Below are some of the highlights:

The spring 2017 season is scheduled to begin March 20. If you need to stretch your legs, come visit us in our new facility north of the batting cages! Once the spring banding season begins, the station will be open from sunrise to 11 a.m. Monday through Saturday. Follow us on Facebook:  https://www.facebook.com/Lincoln-Land-Community-College-Bird-Banding-Station-1623835961203812/

Thanks again for all the support each of you has provided for this project!