The Ag Club is selling an 8-foot picnic table and five bean bag game sets. The table is $135, including free delivery in Springfield and bean bag sets are $50 each. They are in various themes, including sports, etc. Email bill.harmon@llcc.edu or call 786.2573. First come, first served. 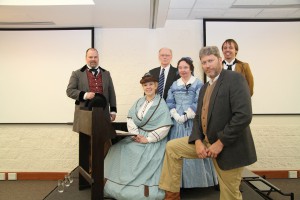 The presentation was sponsored by the Logger Activities Board.

The Logger Activities Board invites the LLCC community to a symposium to commemorate the 150th anniversary of Abraham Lincoln’s death. Dr. Terry Alford, 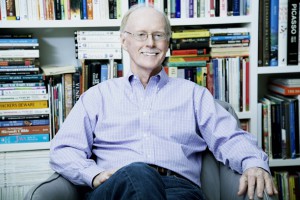 professor of history at Northern Virginia Community College-Annandale will present “John Wilkes Booth: A New Look at an Old Story,” TODAY at 1 p.m. and 6 p.m. in the Trutter Center. The event is open to the public and admission is free.

In his presentation, Dr. Alford will discuss new discoveries, as well as new thoughts on old understandings of the young man who committed the most consequential murder in American history. The presentation will feature actors portraying individuals who witnessed Lincoln’s assassination.

Dr. Alford is a nationally recognized scholar on John Wilkes Booth and the Lincoln assassination. He has appeared on “20/20,” ABC News, the History Channel, the Discovery Network and PBS. He is the author of “Fortune’s Fool,” Alford’s biography of Booth, which is the first full biography of Booth ever written that offers new information on the Booth family’s acting careers and relationships and 19th-century theater history.

Questions about the symposium can be directed to the LLCC Student Life Office at 786.2241.

The Environmental Club traveled to Kearney, Neb., for two days over spring break to view the Sandhill crane migration.

(Approximately a half million cranes visit the Platte River area in central Nebraska every March and April as they migrate to parts of Canada, Alaska and Siberia.)  The club went to the Rowe Sanctuary-Audubon at Gibbon, Neb., and watched the birds from a viewing blind at the river as they roost

at sunset. Unfortunately, we didn’t see as many as we had hoped that evening because of two major snowstorms that came through before we arrived. But we did get to see several thousands of them feed in the fields nearby the next day!

The Lamp was honored with 13 awards, including the top staff award and reporter of the year, at the Illinois Community College Journalism Association awards banquet April 10.

“Winning first place in the Mike Foster General Excellence Award was gratifying,” said Tim McKenzie, adviser of The Lamp and assistant professor of journalism and humanities. “It shows the whole staff did great work covering the campus and consistently putting out a top-notch publication.”

Lamp editor Ryan Wilson of Auburn was named Reporter of the 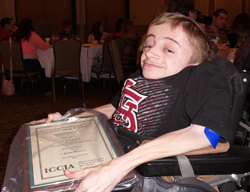 Year, based on one reporter’s ability to use a range of styles to cover a variety of topics.

The Logger Activities Board invites the LLCC community to a symposium Thursday, April 23 to commemorate the 150th anniversary of Abraham Lincoln’s death. The featured presenter is Dr. Terry Alford,

professor of history at Northern Virginia Community College-Annandale. Dr. Alford will present at 1 p.m. and 6 p.m. in the Trutter Center. The event is open to the public and admission is free.

Dr. Alford is a nationally recognized scholar on John Wilkes Booth and the Lincoln assassination. He has appeared on “20/20,” ABC News, the History Channel, the Discovery Network and PBS. He is the author of “Fortune’s Fool,” Alford’s biography of Booth, which is the first full biography of Booth ever written that offers new information on the Booth family’s acting careers and relationships and 19th-century theater history. Dr. Alford also authored the award-winning book “Prince Among Slaves,” the celebrated story of an African royal enslaved in the antebellum south. He holds a doctorate in history from Mississippi State University and also studied family history at the University of California at Davis.

The event is being sponsored by the LLCC Logger Activities Board and 2015 Lincoln Funeral Coalition, with support from the Abraham Lincoln Bicentennial Foundation.

Questions about the symposium can be directed to the LLCC Student Life Office at 786.2241.

The LLCC Library continues its celebration of National Library Week by hosting a Book Art Contest, in conjunction with Leslie Stalter’s Art 115 – Three Dimensional Design class. Students will drop off their submissions at 2:30 p.m., and library staff will vote on their favorites. Winners will be announced at the next class meeting Tuesday, April 21. Submissions will remain on display inside the library. Other events for Thursday include:

• Food for Fines – the first 100 people to bring in a non-perishable donation will win a free book light. You don’t have to have library fines to donate! All proceeds benefit the Central Illinois Food Bank.
• Free candy at the Reference and Access Services desks.
• Add to the “What’s Your Favorite Book?” poster.
• Daily raffle drawing! Winner will receive a $5 gift certificate to the bookstore.

The LLCC art department welcomes the LLCC community and the 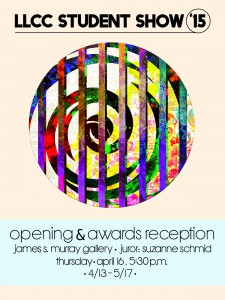 public to join them at a reception for the Annual Juried Student Art Show this evening from 5:30–7:30 p.m. outside the Murray Gallery. Award winners will be announced in several categories. A special invitation is extended to all students who put forth the effort to enter their artwork for jurying. The student show will be open for viewing until May 17.

Donate $5 for Jeans Day today and support the Brian McMillen Veterans Scholarship. Donations are being accepted by the Student Life Office.

The LLCC Veterans Affairs Office and the Veterans Club invite you to wear jeans on Thursday, April 16 in exchange for a $5 donation to the Brian McMillen Scholarship. Donations can be taken to the Student Life Office.

Chris McDonald, Ph.D., political science professor, is the featured presenter at Soup and Stories Wednesday, April 15 from noon-1 p.m. in the R.H. Stephens Room. Dr. McDonald will present “From Springfield to Schlestadt,” which is based on his newly published book “‘Three Lying or Four Sitting’–From the Front in a Ford.”

The Environmental Club is supporting sustainable food production with our fundraising efforts this spring. Let us help you grow your own tomatoes this summer. All of our tomato plants have been grown from organic seed and potted in recycled containers. They represent old, non-hybrid varieties from a variety of sources. Enjoy these treasures from the past! Please order in advance to guarantee the availability of your selections. Advance orders are due by April 19. Plants will be available for pickup by the end of April.

Prices: Individual plants are $2 each. Get any six plants for $10, or fifteen plants for $20 (your choice of varieties). A variety box of 10 plants (growers choice: color, size & type differences in every box) is also available for $15. Please use the attached order form: Environmental Club Heirloom Tomato Sale. You may e-mail it to becky.croteau@llcc.edu, or send a copy for her attention to the MTSC office.