Chris McDonald, Ph.D., professor of political science, will speak on “Great Britain’s decision to leave the European Union” at the next meeting of the World Affairs Council of Central Illinois the evening of Oct. 16. The program is free and open to the public. Dinner requires a reservation.

Chris McDonald, Ph.D., professor, political science, spoke Sept. 12 at the Bloomington VFW post on “You, Your Family and WWI.” He also spoke Sept. 8 at the Illinois State Military Museum on the WWI Battle of Saint Mihiel.

Jolene Adams, coordinator, LLCC Culinary Institute, provided food demonstrations using locally grown produce at the Old Capitol Farmers Market this past weekend. One of the recipes she demonstrated how to make was Shaved Zucchini Salad with Parmesan Nuts. 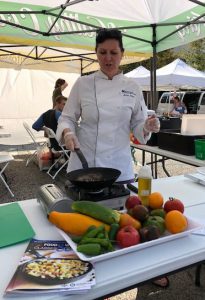 The sixth annual GenHkids SAVOR fundraiser was held June 24 at Erin’s Pavilion. It featured a cooking competition that paired junior chefs (entering grades 4-8 in the fall) with professional chefs. LLCC’s Sean Keeley, culinary specialist, was teamed up with Destiny, and they won the overall competition! Their winning creation used tofu as protein for their tacos. 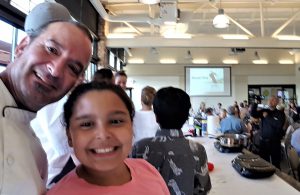 Bill Harmon, program coordinator for the agriculture program, spoke at a meeting of the Sunrise Rotary Club in Jacksonville on May 22 regarding the recent major gift and expansion plans for the program.

Dr. Chris McDonald, professor of political science, will be speaking to the Cass County Historical Society on June 9 about the shadow cast by the World War I over the rest of the 20th century and continues into the 21st century. In his discussion, McDonald will examine some of the issues that lie behind the outbreak of the “Great War,” trace the development of the conflict focusing on some of the ways that it differed from previous conflicts and presaged many modern wars, and look at the contested nature of the peace that followed it.

Four Illinois authors, including John Paul Jaramillo, LLCC professor of English, will be speaking at the Author’s Tea on Tuesday, April 17 from 4:30-6:30 at the Prairie Skies Public Library District’s Pleasant Plains location. Jaramillo is the author of “The House of Order” and “Little Mocos” as well as many stories and essays. There is no charge for this event, but seating is limited. You may call or stop by the Pleasant Plains or Ashland libraries to register. Refreshments will be available at the event.

Laruel Bretz, director, community education, spoke on March 19 at the Ball Chatham Senior Center regarding the LLCC Academy of Lifelong Learning and the educational opportunities it offers adults 50 and greater.

Paul Hudson, D.Mgt., professor of business, spoke at the Jan. 4 grand opening of a new exhibit at the Springfield and Central Illinois African American History Museum that commemorates the 50th anniversary of the assassination of Dr. Martin Luther King Jr. The display includes unique photographs, letters, artifacts, quilts and other items of historic significance. It will be open to the public throughout 2018. The event was covered by WICS, FOX 55 and Illinois Times.

Chris McDonald, Ph.D., professor of political science, presented “From the Sangamon to the Rhine: The Letters and Photographs of Kent Hagler” Jan. 3 in the Paul Mickey Science Series at the Illinois State Museum. Rejected by the U.S. military as a result of a childhood injury, Hagler volunteered as an ambulance driver in the American Field Service. Hagler left his place at Harvard University and his family in Springfield and traveled to France to drive ambulances in support of the French army. Dr. McDonald’s talk examined Hagler’s experiences through the lens of the letters he sent home to his family in Springfield.