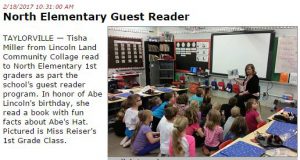 To celebrate Lincoln’s Birthday and to assist in completing 50 Acts of Service, staff from LLCC-Taylorville and Litchfield read to local elementary school students in February.  Pictured in the attachment is Tisha Miller at North Elementary School in Taylorville.  The photo was printed in the Feb. 18 edition of the Breeze-Courier.

LLCC hosts the Illinois Postsecondary Agriculture Student Competition from 10 a.m. to 7 p.m. in the Trutter Center. Several hundred ag students from community colleges across the state are participating. For more information, contact Bill Harmon at 6.2573.

Monday, Feb. 13 – 9th annual Lincoln Lecture, 9 a.m., Trutter Center. Panel of Lincoln experts will address the topic of “Working Together for the Lincoln Legacy” and provide a wide-ranging conversation about the 16th president’s life and the many ways organizations today are working together to keep the Lincoln legacy alive. Read more HERE.

LLCC invites the public to its 9th annual Lincoln Lecture Feb. 13 at 9 a.m. in the Trutter Center. Commemorating the 208th birthday of President Lincoln and the 50th anniversary of LLCC’s founding, the program features a panel of Lincoln experts including Alan Lowe, executive director, Abraham Lincoln Presidential Library and Museum; Kathryn Harris, president of the Abraham Lincoln Association; and Samuel Wheeler, Ph.D., Illinois state historian; with moderator John Squibb, Ph.D., LLCC faculty emeritus. There is no charge for the program.

Panelists will address the topic of “Working Together for the Lincoln Legacy” and provide a wide-ranging conversation about the 16th president’s life and the many ways organizations today are working together to keep the Lincoln legacy alive. Read more HERE.

Monday, Feb. 6 – HIV/AIDS Awareness and Testing sponsored by the LLCC Black Student Union, 11 a.m. to 2 p.m., A. Lincoln Commons. Participants will be provided information concerning HIV/AIDS and can also be tested.

LLCC is celebrating African-American History Month this month. The theme for this year’s observance is “An Expression of Hope and Celebration of Black Life, Black History and Black Culture.”  Leading off events for the month is African-American History Month Kickoff featuring LLCC alum Kenneth Humble with the Kenny Humble Trio, TODAY, noon to 1:30 p.m., A. Lincoln Commons.

LLCC is celebrating African-American History Month during February with various events. The theme for this year’s observance is “An Expression of Hope and Celebration of Black Life, Black History and Black Culture.” View a list of events HERE.

The LLCC Chemistry Club is hosting the fourth annual “Haunted Lab” from 5 to 7:30 p.m. at the Springfield campus. Pre-registration is required at www.llcc.edu/haunted-lab.

LLCC’s Arts and Humanities department will host a free film and discussion series this fall entitled, “Through a Different Lens.” The first film showing will be this evening from 6-9 p.m. in the Trutter Center, featuring:

“Fresa y chocolate” (1994) This film explores the unlikely friendship that develops between two Cuban men who have very different attitudes toward the Revolution. Their friendship becomes the vehicle through which they begin to view the “other” through a different lens which ultimately leads them to a more profound understanding of freedom.

In addition, the Trutter Museum will be open, with culturally relevant artifacts from the Trutter collection on display in the reception area. Beginning Sept. 30, a new exhibit, “Trutter: Black and White,” will open, featuring photos of landmarks designed by Philip Trutter. Film series attendees are encouraged to come early to enjoy the art and history prior to the film showings.

The next films in the series are:

Sept. 22: “Who is Dayani Cristal?” (2013) This film begins with the discovery of a body in the Arizona desert. With few identifying marks, the staff of the Pima County Morgue attempt to identify this body and, in doing so, they begin to put a human face on one of the many migrants and refugees who move through Central America and Mexico to reach the “north.” END_OF_DOCUMENT_TOKEN_TO_BE_REPLACED

Paul Van Heuklom, professor of English, will perform a Native American flute concert in the LLCC Recital Series on Sunday, May 1. The 4 p.m. performance in the Trutter Center on the LLCC Springfield campus is free and open to the public.

Van Heuklom is a member of the Sangamon Valley Flute Circle. Although he views the Native American flute as primarily a meditative and solo instrument, he has performed at such diverse venues as Blackburn College, the Decatur Lakeside Music and Arts Festival, Cub Scouts and Boy Scouts of America, the Mary Bryant Home for the Blind, Springfield High School Multicultural Festival, LLCC Multicultural Fest and Recital Series, and the Clinton, Ill. 4th of July Celebration.